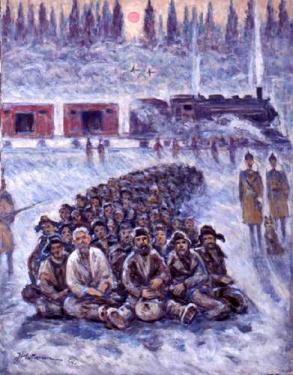 Back in 2009 I had the privilege of taking care of my mother who was diagnosed with terminal cancer. I held back my tears during dinner one night when I declared that I would climb Kilimanjaro in her honour. Her years spent in the Polish refugee camp in Tengeru, Tanzania had a splendid view of this magnificent mountain. She barely looked up and said, “uhuh”. An ‘uhuh’ somewhere between here-she-goes-again and yeah-right. I like to think we both knew it would happen. 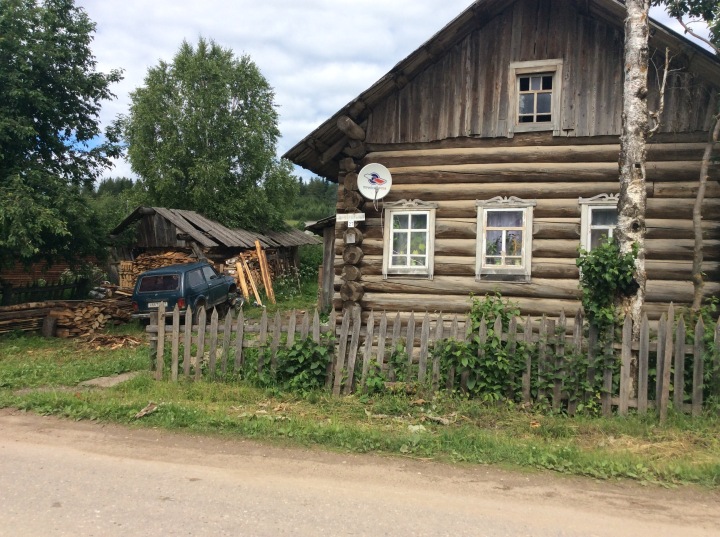 The heavy rain had turned potholed dirt roads into thick mud by the time we arrived in Bestuzhevo. We were very graciously and warmly received by Nikita, who laughed as we ate up his toasted rye bread slathered with honey and downed with thick coffee laced with rhodiola extra he had distilled. Toast is nonexistent in Russia. I liked this guy already. His patience with our inquiries on getting to Kubalo was purely Russian. “Yes, yes we will deal with it but first…you will stay here.” 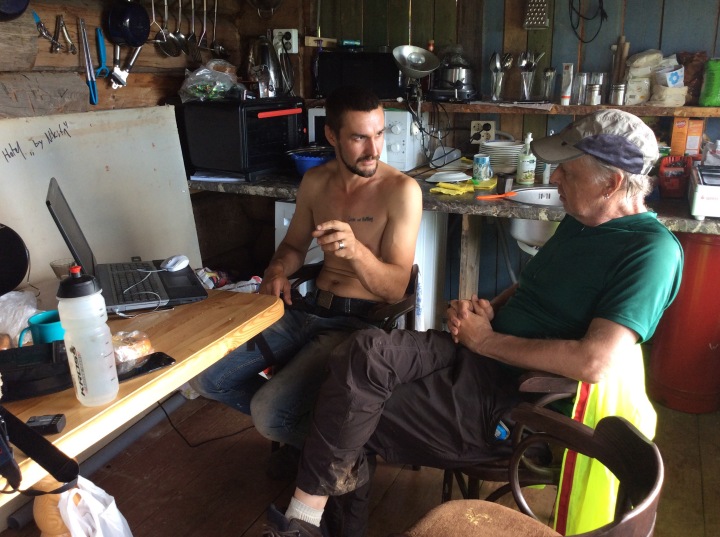 Two days and several heavy thunderstorms later our driver/guide Mikael appeared in the craziest vehicle I have ever seen. We were warned that the road would be very rough and possibly impenetrable, but this thing was an ingenious work of art.

This vehicle was a homemade Argo! Steel frame, sheet metal, a pull start engine, balloon tires carved out of old tractor tires (yes carved out to lighten them for floatation and make them soft) a cushioned plank for our seat and complete kit with axe and chainsaw holders.

The mud road soon turned to foot deep water, then dense brush, alternating to courduroy road (sometimes actually holding together) that would completely disappear at times.

Mikael just kept on chainsawing, bushwhacking, doing the occasional reverse and charge or just plain driving over obstacles. My jaw was dropping.

With deft bracing to avoid any rib smacking and jolting chiropractic treatment we slowly crept through the thickly forested 12 km ‘road’. 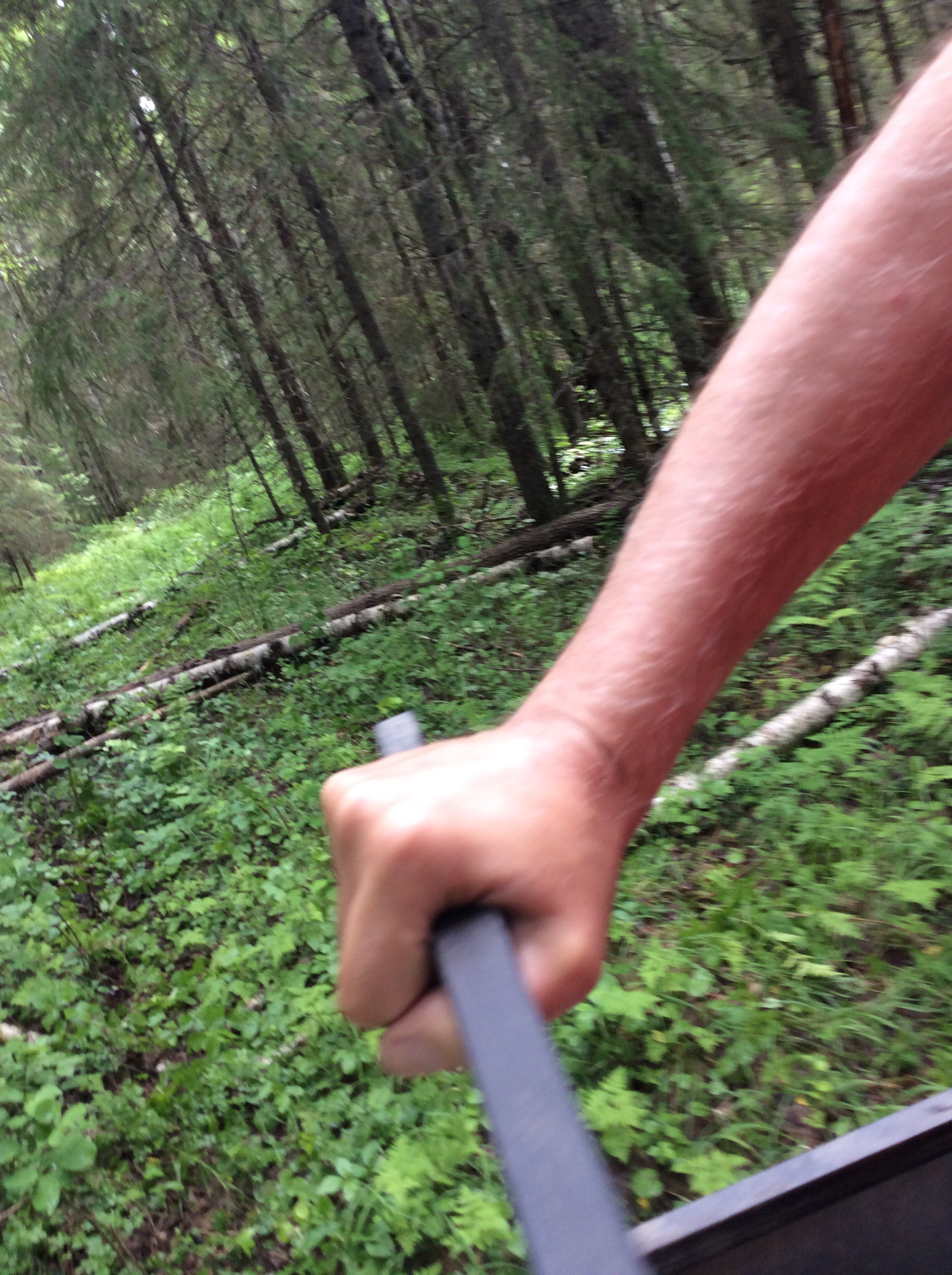 Then the light poked through. A clearing filled with tall wild flowers and grasses. This was it!! This was the site of Kubalo, the labour camp my 10 year old mother spent almost two hard gruelling years at. My heart absolutely leapt. 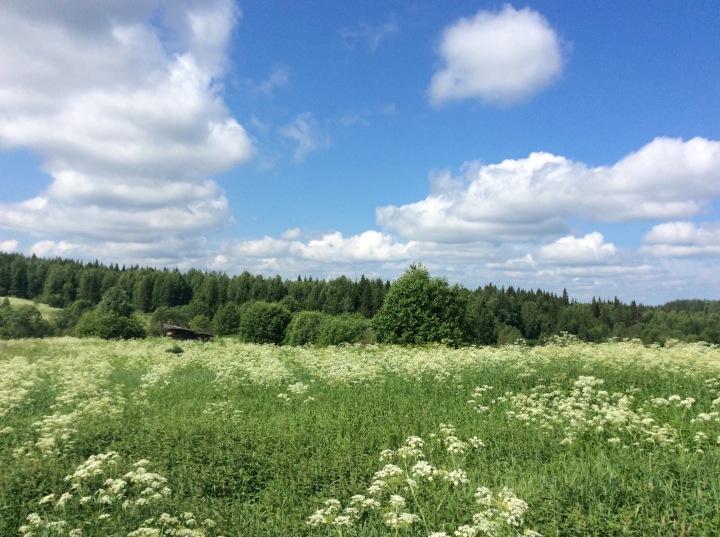 There was one old cabin left on the East field. It had a rotting platform bed and rusted woodstove inside.

Just as my uncle said, the sloping field came to a creek. It really was fitting the description. 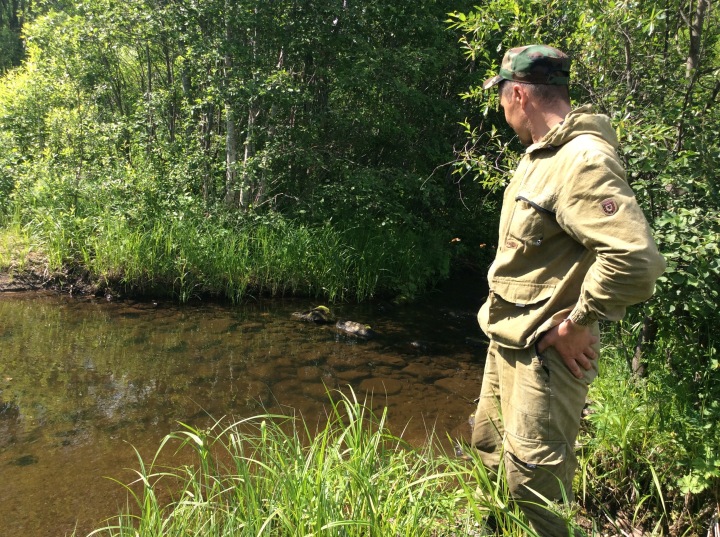 Once we crossed the creek and climbed the hill, we came to another cabin.

Mikael explained that hunters and fishers constructed this cabin out of the timber remaining from the labour camp. Quite possibly from the barracks my mother endured bed bugs, lice and starvation in!

The cabin was used in winter only (nobody else would attempt this summer road thing!) We explored the area and pondered how it is that such a beautiful view over the river could have such a horrific history. 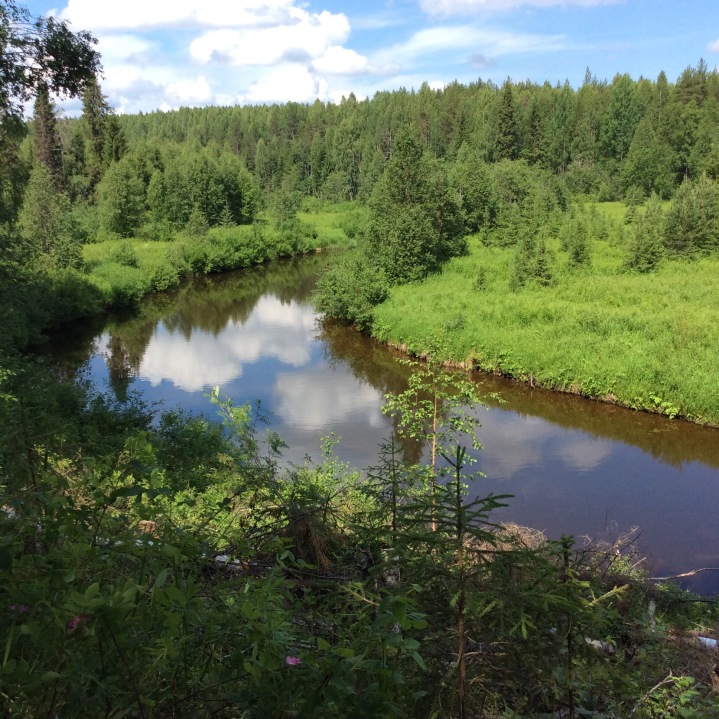 There are such mixed feelings I have been tossing about on this trip. Contrasts, incongruities and odd juxtrapositions. I have studied the map of labour camps in the Archangel area and am amazed with how many camps there were. How many lives were profoundly altered. How many died here. How many untold stories. 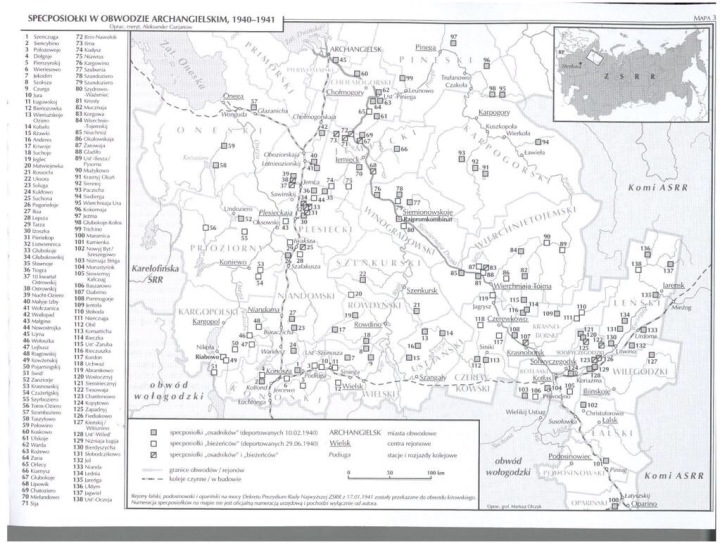 And yet I am strangely happy to be here, to be in the forest again, to smell a campfire. To dip my hands into the Ver’yuga River. To share conversation with a superb Russian guide and an equally skilled filmmaker. I feel blessed.

We did more filming, learned about Mikael’s family (one grandparent was Polish and was at a labour camp), fed the steroidal horseflies to the leaping delighted minnows and I attempted to record some thoughts.

Yes that is a horsefly disguised as a fighter jet. Those minnows surfacing are just as aggressive with their horsefly lunch. Mosquitoes and black flies also set up a squadron. This was voracious boreal wildlife.

Returning through the fields that held the six barracks, school, bakery, communal kitchen and NKVD administration building, I bowed in silence. My awe and respect for the Sybiracy only increases exponentially when I see how harsh it must have been. And then for one to be lucky enough to survive without having your story told!

During the trip back all I could do was stare off into the boreal forest and ponder this unexpected adventure (all while tightly gripping those steel bars). My huge grin must have given away the sheer joy of being in the bush and successfully finding Kubalo-directly conflicting with the emotions at being here. The trauma endured by 1-2 million Poles (and Lithuanians, Ukranians, Belarussians) and tens of millions of Russians are constantly churning. It is hard to reconcile seeing Stalin’s medals so proudly displayed in the Moscow Kremlin with this brutality.

To my great shock, upon our return there was a pot of boiled potatoes on the stove. The very last day my mother’s family spent in Kubalo was December 24, 1941. For Wigilia (Christmas dinner) my grandmother had  boiled a pot of potatoes and instructed my mother and her brother “Jedzcie ile chcecie”- to eat as much as they wanted.  They were flabbergasted. This had not been heard for two years! The next day my grandfather hired a sleigh in exchange for his last suit. They drove the whole night south for 10 days to Bestuzhevo.

I did end up climbing Kilimanjaro in 2010. I think my mother really did know I would do that in her honour. I cannot imagine what she would have said if I told her I would go to Kubalo…and then eat boiled potatoes after that journey. Life is so full of surprises, who knows. Maybe she would have just said …”uhuh”.

10 thoughts on “A Pot of Potatoes”