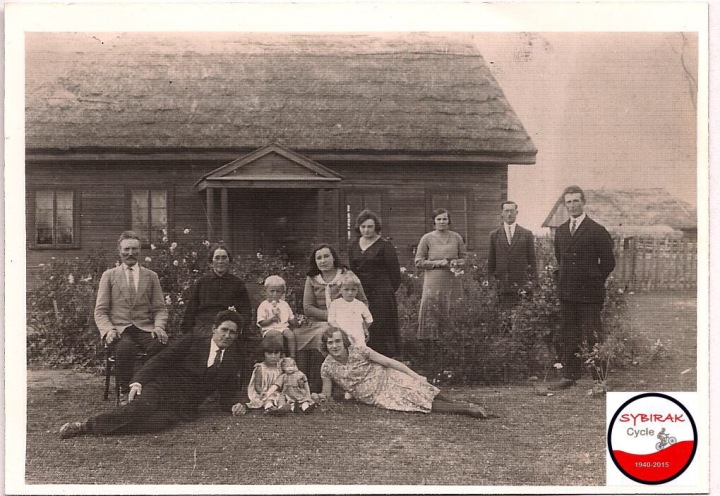 Sometimes there are stories that manage to snatch your soul and shake hard. The obsession with my Polish mother’s past wasn’t always like this. I didn’t even really understand the events or explanations for the African sculptures perched around our family home. As we embark on this journey I still am not sure I truly understand it, but here is an attempt at trying to piece some answers together.

My mother is the little girl sitting on the ground holding a doll. She sits between her parents in front of the family home near Zaostrawicze in an area of Eastern Poland.  They sit relaxed and smiling having no idea that life would soon no longer be a tranquil pastorale existence.  On February 10, 1940 the NKVD (precursor to KGB) knocked on their door at 2 a.m and stated that as ‘enemies of the people’ they have 3 hours to pack some belongings to be resettled. Guns were pointed. Shock ensued.

I am sitting right now in Kotlas, Russia at the confluence of the Northern Dvina and Vychegda, two wide, navigable rivers. This is the area that my mother was ‘resettled’ to. We have cycled and hopped trains to get here and I have this rather heavy feeling. It poured and rumbled this morning, a fitting reflection of this odd pilgrimage . Like most Sybiracy, my mother seldom spoke of this tumultuous time if at all. It was the African sculptures, the tendency to gnaw and suck on bones until they were clean and a yellowed school certificate with the image of Stalin and Lenin in the corners that gave away a deeper story. What happened to these people?

We have cycled to her birthplace near Zaostrawicze (now Belarus), walked among the pine forests of Katyn (the sight of the mass execution of Polish officers and intelligentsia), ridden the train out of Baranowicze (where they were forced into windowless train wagons) and now here I sit at their destination. I was not prepared for Kotlas. For the odd confused feelings that are bubbling up. For the cruelty inflicted. For the omission of such a significant story in history…and from our dinner table. For the kindness of Russians. For all of it.

And perhaps that is why, on some unconscious level, this trip following the path of the Sybiracy seemed to crystallize. A bone deep calling to gain some sense of the trauma that the 1-2 million Poles and countless others from Eastern Europe endured. Why did Stalin decide to completely alter the lives of millions? How is it this chapter was missed in my high school history texts? When I first asked my mother she said, “we didn’t have a word for it but nowadays I suppose it is called ethnic cleansing.”

And so tomorrow we embark on a search for Kubalo, the actual labour camp my mother was sent to. Descriptions from locals are brimming with challenges – train 4 hours, road 170 km filled with potholes, mud and construction. ‘Nobody goes there!’  Yes I am feeling a little nervous about this but if I don’t try this now I never will.  Will there be any remains?  I have no idea. Perhaps what is more important is to unearth the unspoken story. To honour the dignity and courage of those that endured this unacknowledged chapter in history. To honour the Sybiracy. This is for you.

8 thoughts on “This bone deep calling to Kotlas, Russia”